So about a month after the Rock n Roll 5k, my knee was almost fully healed, I headed to the MCM 17.75K. It is a very special race in that it commemorates the birth of the Marine Corps. The relatively small race with only 1775 runners lends an added air of camaraderie. The real prize…guaranteed access to the uber-popular People’s Marathon. My fast-typing, freakishly small, yet adept, Asian hands had gotten me into a race that sold out in about 8 minutes! B, unfortunately, has big, white, banana hands and he did not get in. LOL now, but when it happened, we had another little skirmish over that. Secretly, I thought, “Well, that’s karma because you’re the one who registered us for the wrong race last year!” But I have since forgiven him and have released that horrible resentment.  #marriage 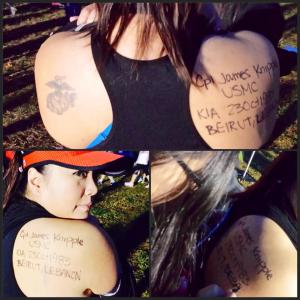 So how did I end up wearing a tutu for this race?  Blame it on the Idiots!
I met a wonderful tutu maker who also happened to be an Idiot.  It also turned out that she had an uncle (fellow Marine) who was KIA in the 1985 Beirut bombing.  Of course, I would wear the beautiful Stars and Stripes tutu she made me and run the race in honor of her Uncle Jim.  #synchronicity

What an incredible experience it was, running through the hills of Prince William Park near Quantico, VA.  Several salty vets shook my hand or exclaimed, “Semper Fi” during the race (as they passed me..haha).  I met one vet (in our hotel lobby after the race) who was actually in Beirut himself.  He thanked me and described to me the events that happened the day of the bombing.  Talk about chills.

And, as seemingly as simple as that, I finally EARNED the right to run the 39th Marine Corps Marathon.  All’s well that ends well, no?

If only life were that simple!  I was thrilled that I showed up and completed a tough, hilly race.  I trained better than I ever had in the past and I did ok.  However, a few days before the race, I wasn’t confident that I could run the course in my Skechers (because I ran the course about 2 weeks before and my feet REALLY hurt) so, stupid me pulled out my old Glycerins…besides, I thought they matched the outfit a little better.  I know, I know.  I’m an idiot.  (Note the usage of capitalization, or lack thereof.) So what happened?  I was sidelined for about 5 weeks with what was acting like a stress fracture in my left tibia (shin)…this is while knowing that I’m actually going to get another chance to show up for the MCM.  Frustrated, I buy some padded bike shorts and take a couple of spin classes and discover the magic of KTTape!  Marathon training continues…

Oh, and here is the link to the ESPNw article: http://espn.go.com/espnw/news-commentary/small-wonders/article/11196011/power-tutu

Next:  Divas in Tutus