Running Season 2014.  I made my vow after a horrible showing of the 2013 season, that I would show up when I said I would. I was ready to get to work. I realized that what I once detested, I actually liked, and for more reason than just superficial accolades and cute selfies for Instagram and FB.

Back in 2012, I had been added to a very special FB group by one of my Marine Corps boot camp/reserve unit friends.  I actually had to take another vow which also required spitting and spinning around.  It was called the Idiots Running Club.  Little did I know that this group would eventually be crucial in my evolution as a runner.  I would post and comment sporadically and befriended a few members.  I found the group incredibly supportive.  Also, for a group that was fairly large, there was very little douchebaggery.  There are some serious athletes in our group who take their running seriously but magically, do not take themselves so seriously.  It was wonderfully refreshing.  Through this little club, I met my future coaches, without whom, their wisdom and REAL training plans, I would still be dabbling and unintentionally disrespecting serious distance runners everywhere! #awkwardsentencestructure

B and I signed up for the Rock n Roll 5k in DC early in the year.  And of course, like an Idiot, I’m actually training this time and trip over an uneven sidewalk a week before the race and really did a number on my knee.  I still showed up though, with oozing wound and all!  I managed to hobble-run to a PR!  (that should be a clue as to how relatively slow I am) 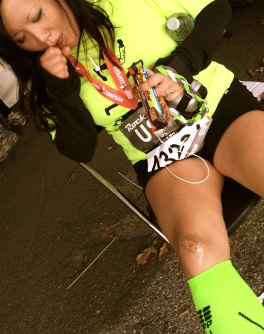 IT FEELS AWESOME TO SHOW UP!  It feels crappy to flake.
Just show up!
Next mission:  Marine Corps 17.75K