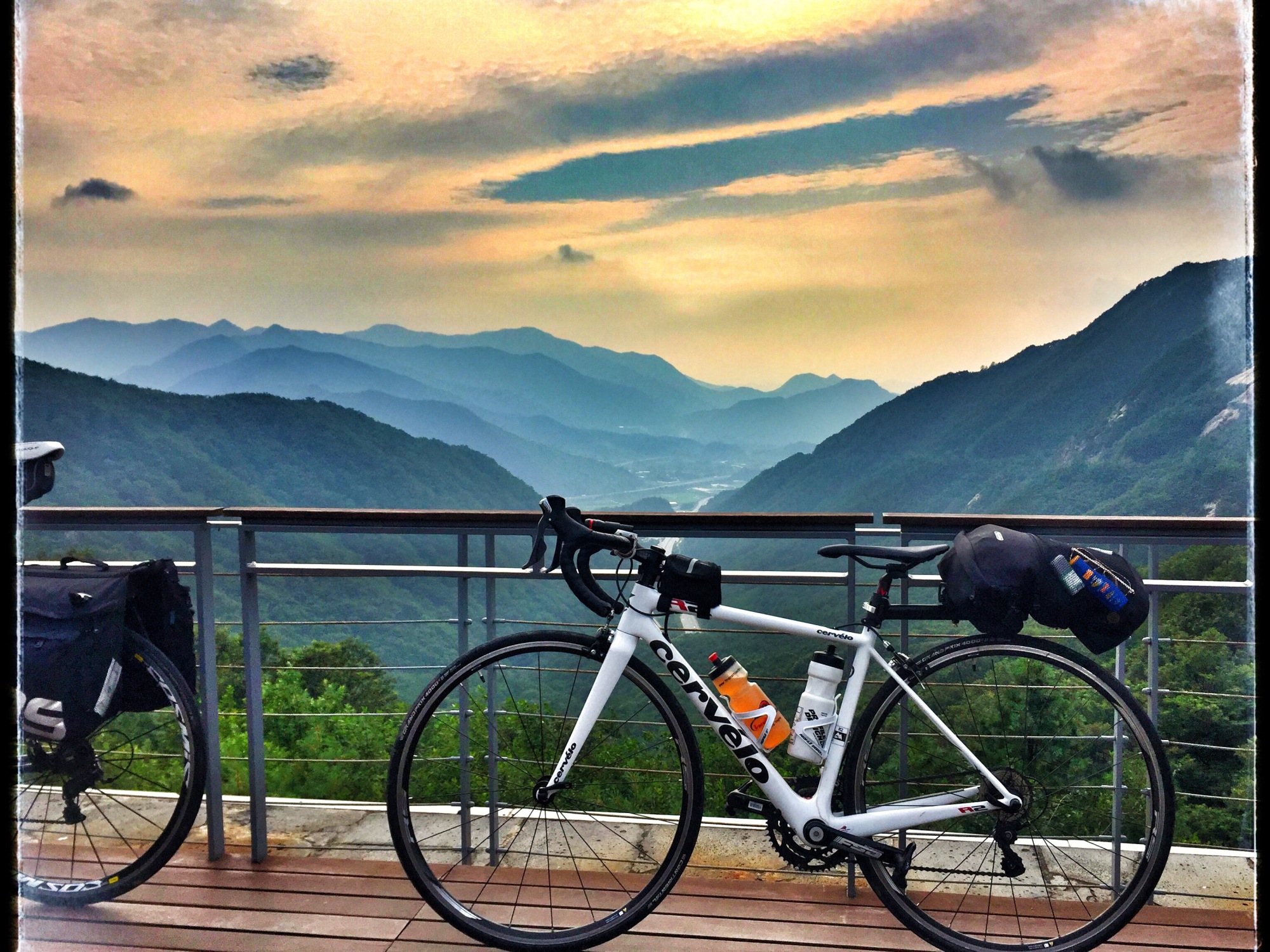 After a decent night’s sleep, we finally got an early-ish start on what we knew would be my toughest day.

I’m really a novice cyclist. My guy bought me my Cervelo just back in April and it wasn’t until May that I began riding in some type of earnest. I do like to think I’m a bit of a natural because I did spend many hours on my 10 speed as a youngster, happily devouring the hours of freedom and pure love riding the roads of my neighborhood back in suburban Philadelphia.

My longest ride to date had only been 60 miles so I wasn’t sure how my body would feel with this 70 mile ride which included the most challenging climbs of our route, especially after 3 straight days of riding. My mindset was quite simple though: just keep turning over the pedals and stay on my man’s ass as best as possible.

With that, we began. But first, a stop at a local bike shop was in order to check on the flat tire from the day before. He had ridden the rest of the way on CO2 so we wanted to refill with regular air.


We rode out of town back to the trail which pretty much began with some steep climbs back out of Sangju. One of the downhills was so steep and on gravel-y, uneven terrain that I carried Aurora down for fear of going headfirst into the river below. But at least I made the climb without tipping over this time. LOL 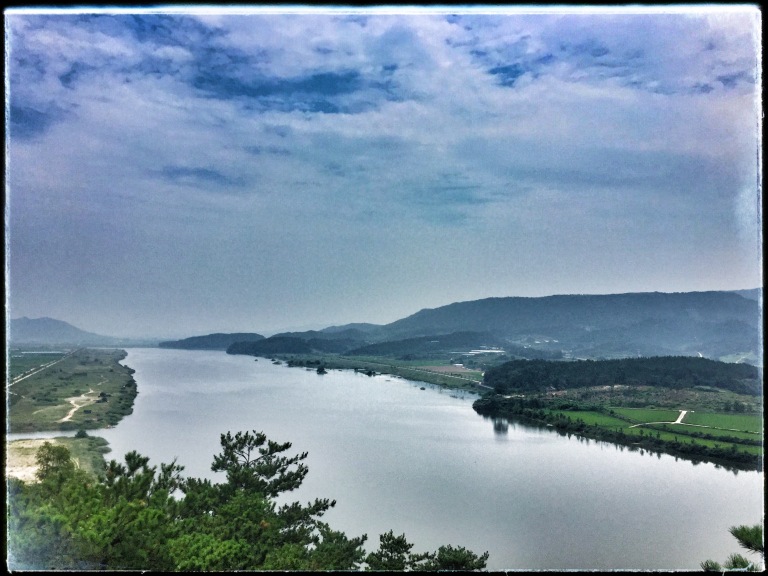 We made our way back down to the trail (that you can see to the left of the river) and pondered where exactly do the grains of rice grow as we rode through the bright green paddies. I still have to google that. 😆 #badasian

The “4 Rivers” Trail is a pretty impressive system that runs through South Korea but there are sections that are just downright confusing and aren’t as clearly marked as you may think. Not only did the man have to lug most of our gear, he was actively navigating using Naver and a bit of his memory from last year (although we made several more hotel stops this time around) and all this with spotty service in certain areas. I guess this is when I kinda didn’t realize the stress he was juggling doing all that while worrying about my safety behind him and I’m sure the slight frustration he felt with not being able to ride as fast as he can.


So we get to a complete blockage of the trail here. After I peed in the bushes, we decide to just ignore the sign and barricade and carry our bikes over and see what the deal was. We didn’t get far as the entire width of the trail was blocked by fallen trees and all kinds of rocks/mud, etc.

We turn back around and re-navigate. Frustrations are definitely mounting because time is getting away from us and the damn heat is getting to us. We still have a long ways to go and we really didn’t want to ride in the dark in the thick of the highest mountains we’d climb. Or at least, that was what was going through one of our minds. (No, not mine…I really didn’t know!)


Before we made it here though, we had a big fight at our first hydration stop. I guess I was a little snappy (although I wasn’t intending to be!) when I asked him, “What are you doing?” He had sat down and was focused on his phone navigating as we had just gotten out of that dumb detoured area. I really meant it as, “Do you want me to go in and get us some drinks here?” But of course, in classic gender difference battle style, he snaps back at me, “Do I have to tell you every single thing I’m doing?” Hahaha. Yeah it’s funny now. I was also majorly PMSing and weepy that day so little snappy comments escalated into me snapping back, crying, not speaking and paralyzed, not wanting to ride anymore.

Meanwhile the sun is beating down and again, more time is ticking and my man is just pissed. We are both stubborn AF so yeah…rough patch but somehow I get back on bike and follow him. I probably cried for at least 10 more miles, not just about the dumb fight, but about life in general and the seeming difficulty of it all. Yep, pretty much the depths of pity party central.


We are just shy of 50 miles and we stop for “food” right before the base of the big climb. We’re still not really speaking and I’m just secretly wishing he’d hug me. But, of course, it would be too easy for me to ask him for one or just give him one so I don’t and I continue to somewhat feel sorry for my state. 😩😂 (Seriously, it’s way funnier recalling it than during it!)

I’m calm enough though to take on this climb that’s described as relentless. It’s about 2+ miles straight up, not extremely steep but long. I’m advised to just spin, go slow and steady in the easiest gear. And that’s what I did but it was still torture. I hate riding slowly. At one point, I thought I could run faster! Not knowing how long the climb was, I think I conserved too much. And with my emotional state all jacked up, I certainly wasn’t in a performance attack mode, but I made it to the top.

Looking back, I remember seeing my man pulling up to the cute stopping station at the peak and he looked as if he was proud of me as I pulled up. But I was feeling so sorry for myself that it just wasn’t enough. We were both taking pictures of the incredible view but the tension was still palpable. I was mad/hurt that we didn’t take our usual selfie and when he asked me to walk over to the side we came from to take a few more shots, I said something bitchy and refused. Yes, I’m cringing as I write this. 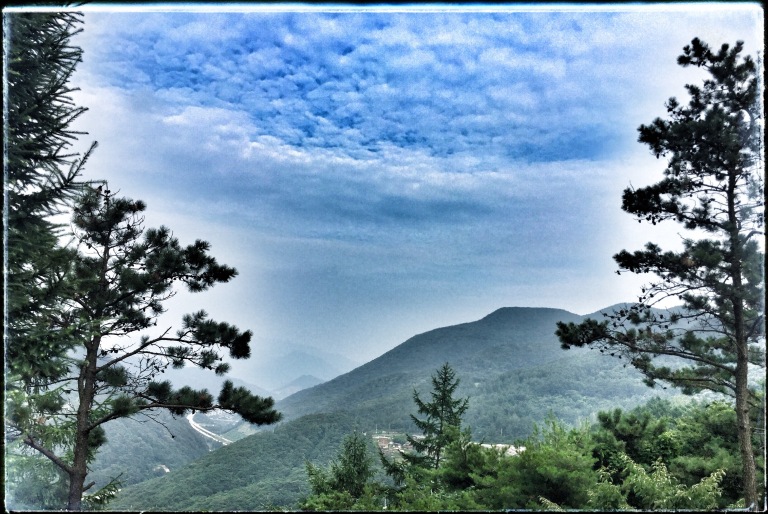 So a little more tedious and stupid arguing ensued. I really see now how impossible I can make things. It’s getting later and later and I’m pouting and delaying us even more. I am publicly admitting to my wrongness here. But man, relationship navigation is damn tough at times. It really takes a strong, kind, patient man to keep me in line.

Even with all that, he stops halfway down the mountain so we can get some more selfies together and this beautiful sunset.


I finally got my hugs but don’t get it wrong, he still gave it to me good. He’s a tough and stubborn mofo. From this point on, he spoke not one word to me for 20+ more miles and rode pretty damn hard through the dark. He was so pissed and I knew it and I knew I had to keep up, averaging a pace I could never do on my own. I was shocked I had any energy left and just kept my mouth shut, pedaled hard and just took in how much I really appreciated the complexity of this dude I’d been tailing on a bike for 4 days.

We finally made it to our hotel…ironically called The Base. Was it a sight for sore eyes! Aurora had been sounding weird the whole way from the mountain. Turned out my pack had tilted to one side and rubbing against my rear wheel the whole way to the hotel. The friction burned a small hole through it!


Wrapped up a long day still tense and emotional. I know, right? Why can’t I just let shit go?! I was ready to quit the ride and the relationship but we somehow ended up sleeping in each other’s arms and ready to face another day of riding.

It’s almost a week later as I write this, and I finally realize, I mean really feel in my bones what it means to be unstoppable in work and love and life. It takes belief, courage, humility, hard work. When there’s love, passion and a true connection underlying all the bullshit, whether it’s between two souls, or with your work, that’s when you stick around for the long haul.